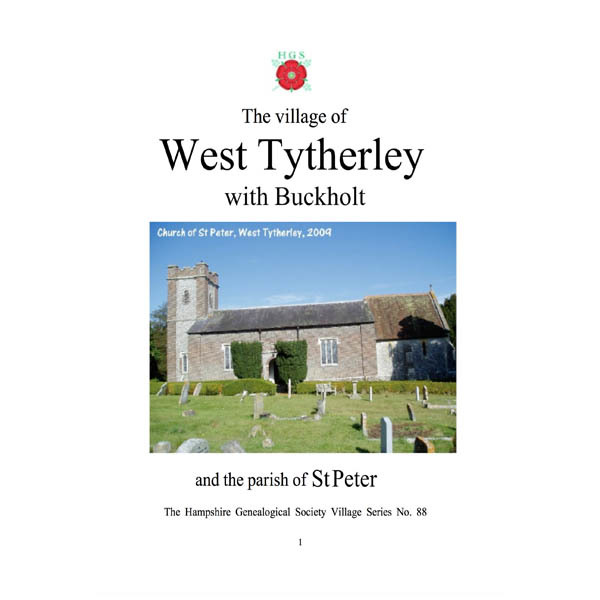 West Tytherley with Buckholt Booklet (VB088) is a comprehensive study of the study of this rural Hampshire village and theparish of St Peter. It is located 7 miles south-west of Stockbridge and 9 miles north-west of Romsey, and forms part of the county boundary with Wiltshire. The parish also contains part of West Dean that was at one time in Wiltshire but then moved back to Hampshire in 1883.

At time of the Domesday Book the area was part of Tiderlei but soon after was divided into east and west. The manor at various times was held by the WHITEHEAD and THISTLEWAYTE families before being owned by the BARING and finally the SINGER families. The current church replaced the old one 1812/3 although the graveyard for the old church still remains. The early Victorian school is still flourishing today and has had many staff over the years including Robert Henry and Edith MAJOR who taught in the school from just before 1889 until after 1911. A private school, Northaw School, also operaterd at Norman Court. The village pub, The Blacvk Horse, also had many landlords although James FOOKS was named in 1849 and remained there until he died in 1873.

This twelve paged booklet includes a great deal of historical information covering West Tytherley including not only the gentry but also the teachers, publicans and ordinary people. Surnames of ancient families in the parish mentioned include BLAKE, NEWMAN, PHILLIPS, PRAGNELL and ROGERS.

To assist your research, useful references for West Tytherley documents and records held at the Hampshire Record Officer are given throughout with other sources and website addresses for more information

West Tytherley Village Booklet by Roy Montgomery and Hampshire Genealogical Society (HGS) is licensed under a Creative Commons Attribution-NonCommercial-NoDerivs 3.0 Unported License. Based on a work at www.hgs-familyhistory.com.