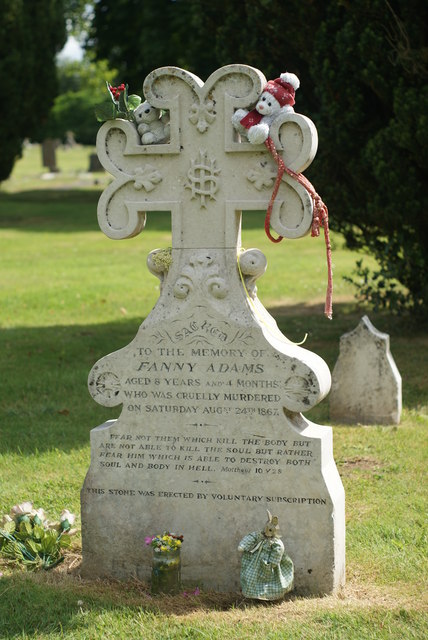 Who was Sweet Fanny Adams?

The phrase ‘sweet Fanny Adams’ is still used today, but do you know how it was first coined? I shall tell you by recounting the tragic story of Fanny, who was my great grandfather’s first cousin.

Fanny Adams was born on 30 April 1859 in Tanhouse Lane, Alton, Hampshire. She was the fourth child of George ADAMS, a bricklayer, and his wife Harriet, formerly MILLS.

By August 1867  Fanny had two younger sisters – Elizabeth Ann (“Lizzie”) born in 1862 and Lilly Ada born in 1866. Although at the time Fanny was only eight years old, she was “a tall, comely and intelligent girl. She bore the appearance of being several years in advance of her age and was of a lively and cheerful disposition”.

Abducted in the Hop Gardens

On Saturday August 24th 1867 Fanny went out to play with her younger sister Lizzie and a friend Minnie WARNER. While playing in the Amery hop gardens next to Tanhouse Lane, they were approached by Frederick BAKER. Baker was a young man of 29, who was solicitor’s clerk to a Mr CLEMENTS in Alton. That afternoon BAKER was wearing a black frock-coat, light waistcoat and trousers. He offered Fanny a halfpenny to go for a walk with him. The other girls wanted to come too, so he gave them three half-pennies to go away and buy sweets. The last Minnie and Lizzie saw of Fanny was Baker telling her not to cry but to go with him.

The Search for Fanny

When Lizzie arrived home without Fanny, their mother was alarmed and began a search for her. In the meantime Thomas GATES, a labourer, was on his way home from work. As he crossed the hop garden he was horrified to find a child’s head resting on two hop-poles. The search was immediately stepped up. Fanny’s father, who had been playing cricket at The Butts, rushed home threatening to shoot the culprit with a shotgun. Slowly the full horror began to reveal itself. Fanny’s body had been horrendously sliced, ripped apart and strewn all over the place. The pub called “The Leathern Bottle” was set up as a collecting place and the recovered parts of the body were examined by Dr L LESLIE MD.

Frederick BAKER was apprehended and identified by Minnie WARNER as the man who had taken Fanny. There were spots of blood on his shirt-cuffs, socks and trousers and an entry in his diary read: “24th August, Saturday – Killed a young girl”.

The Inquest was held at the Duke’s Head, Alton on Tuesday 27th August, under the Deputy Coroner for Hampshire, Robert HARFIELD. It was decided that Fanny had been murdered between 1.30 and 3.30pm, although the cause of death was difficult to say as the body was so dismembered and no weapon was found. Her death certificate states the cause of death as “Injuries inflicted by Frederick Baker (murder)”. Hence, Baker was found guilty before he was even tried.

The following afternoon Fanny’s remains were buried in Alton cemetery. The service was read by the Rev W WILKINS, curate of Thedden. Many people were present and a collection was made to pay for a gravestone. The Parish Register entry for Fanny’s burial has a footnote reading “Cruelly murdered by Frederick Baker”.

Fanny’s tombstone still stands in Alton Cemetery and reads: “Sacred to the Memory of Fanny Adams aged 8 years and 4 months, who was cruelly murdered on Saturday Augst 24th, 1867” “Fear not them which kill the body, but are not able to kill the soul, but rather fear Him which is able to destroy both body and soul in hell”. “This stone was erected by voluntary subscription”.

The Trial and Sentence

BAKER appeared before the magistrates at Alton Town Hall on August 29th and was committed for trial at Winchester. The case came up in December 1867, and many Alton residents gave evidence. His father was the main defence witness, who described him as “a weakly, nervous child”. The case went badly for BAKER and the Defence attempted to prove that BAKER was mad. The Judge and Jury were not convinced. A ‘guilty’ verdict was pronounced and a death sentence given. BAKER was hanged on Christmas Eve, 1867. It was one of the last public hangings in front of the Winchester County Jail.

The expression ‘sweet Fanny Adams’ was coined in 1869 by sailors in the Royal Navy, whose macabre humour likened the contents of their tinned meat to Fanny’s remains. From this it gradually became a euphemism for ‘sweet nothing’.