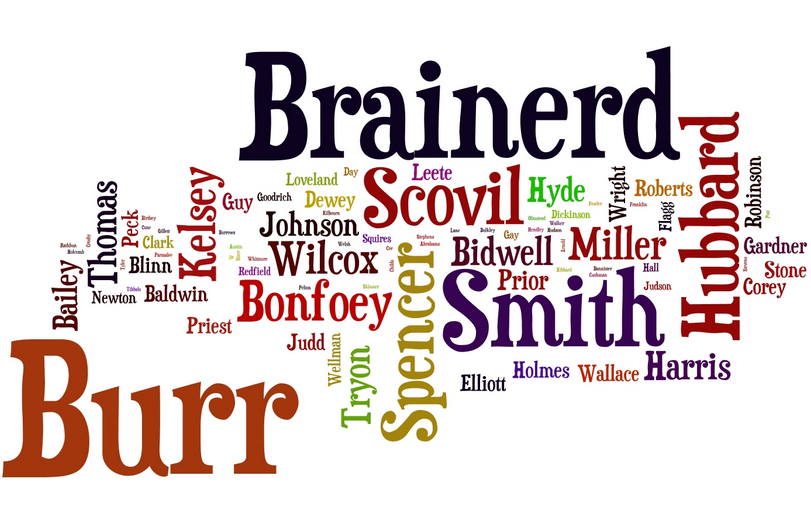 What’s in a ‘Hampshire’ Name?

For family historians, the very essence of their research is captured in a surname. Without a surname ours would be a fruitless search. However, before the Norman Conquest people in Britain did not have hereditary surnames, they were known by their forename or maybe a nickname.

Surnames were derived from an endless list of sources, and lucky is the person whose surname can be attributed to a place or locality because then you might be able to pursue your family tree back to its earliest roots.

Named after a Location

Surnames deriving from a place are probably the oldest and most common. It is better to use the terminology – location rather than place, as the name may be derived from a feature in a landscape, a manor, farm, village or town. Or it could be from the name of those who owned any of the former. Some location derived names are obvious, and a trawl through the Hampshire registers reveals some.

In the Hampshire Baptism Index a random search of surnames reveals 83 Portsmouths and a  smattering of Broughtons and Lymingtons. Clustered in the general area not far from Hurstbourne Tarrant, there are a surprising 254 Tarrants. There are also a clutch of 163 Pentons which pop up around Andover, not far from the ‘Penton’ villages. The registers also show the number of children baptised after the name of the place they were found, as was Thomas Winchester who was baptised in St Thomas’s Winchester in 1693, having been found in the church.

Quite often names were adopted when people moved away from their home to another place, so John (who lived in Broughton) becomes John of Broughton. Many who migrated took the name of the place they came from.

Many people took their name from their farm or manor or the name of the lord. In Hampshire the name Dipnall probably comes from the Manor Dippenhall, where we find a William of Dippenhall recorded in a document as early as 1305. (see below).

Countries give us names such as French, there are 125 people in the 1660 – 1751 Hampshire baptism index named French. Immigrants brought their own surnames with them, and Hampshire has its own fair share of surnames that originated somewhere in Europe.

Features of the landscape gave rise to many surnames. There are very many names derived from hill. In addition to hundreds of Hill and Hills in Hampshire, there are a handful of Knollys, meaning the same. Similarly we have Wood, Woods, Greenwood, Woodman and Attwood. Some names are water names, like Fleet meaning an estuary or stream and Bourne.

Plants contribute their fair share of surnames. Trees give names such as Leaf, Bark and Root. Stock, Zouch and Curzon all mean a stem. Then there are Elmes, Hazelthwaite and Maples, and oak alone gives rise to Oakley, Oakerley, Noakes, Oakham, Ockham and many others. Together with Cheynes and Chenies coming from the French for oak, un chène.

From: Alexander de la Rude To: Richard atten Oke A croft of land lying at ‘la bore’ within the manor of Itchel (‘Ihchulle’) [in or near Crondall] between Richard’s land and the land which Henry atte Bore bought and between the king’s highway which leads from the vill (‘villa’) of Ewshott (‘Iweshate’) [in Crondall] to Richard’s wood. For this Richard has paid 20s as a gersum fine. Witnesses: Nicholas atte Oke; Robert de Clere; Thomas de Monee; William of Dippenhall (‘Dupehalle’); Nicholas atten Okette; John de Lynche; Richard de Clere Endorsed with description in late 13th cent hand and ‘Iweschat” and ‘Ichehull’ in early 15th cent hands.

The HGS baptism, marriage and burial indexes are an excellent resource, not just for tracing your own family history but to explore Hampshire surnames and extrapolate data in a different way.