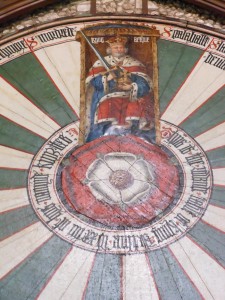 On the wall in the Great Hall at Winchester hangs the fabled Round Table of Arthurian legend. In its centre is depicted a Tudor Rose; a double rose with white petals for the inner flower and red for the larger outer rose.

However, the Tudor Rose design is solely the consequence of the table having been repainted during the reign of Henry VIII. This rose design had been developed in 1486 for the marriage of Henry’s parents, which had united the Lancastrian and Yorkist factions, thus ending ‘The War of the Roses’.

The table itself is said to date back to the fourteenth century, or earlier.  Although uncertain, it is believed that the original rose in the centre was coloured gold. This is a logical assumption, since The Great Hall originally built by William II (“Rufus”, reigned 1087-1100), was perfected by Henry III (reigned 1216-1272), under the direction of his goldsmith Elias of Dereham. Henry was born in Winchester Castle, and one of his main badges was the Golden Rose of Provence, which he assumed on his marriage to Eleanor of Provence in 1236. This was the badge used by Henry’s father-in-law, Raymond Berengar IV, Count of Provence, who is said to have adopted it after returning crusaders had introduced the rose plant into his domain.

Subsequent English monarchs used the rose as an emblem. Edward I continued his father’s golden rose, while Edward III had a ship with a streamer powdered with red and green roses. In time the rose became the national emblem of England.

So, was the Hampshire rose originally gold in colour? We shall never know because there is not enough evidence to support any theory of its origin. It is a mystery that continues to be debated and will forever hold people’s interests because there is no positive proof. Yet, the power of the legendary Round Table in medieval history was so strong that this could suggest that the Hampshire rose had developed from the centrepiece of this piece of fraudulent artistry. Although merely symbolic as a piece of medieval propaganda, many people through the ages would have clearly believed that this was King Arthur’s actual round table, where sat his knights (although not enough room for 100). After all, the Holy Roman Emperor Maximilian I (died 1519) claimed King Arthur among his ancestors.

By tradition the Hampshire rose is red in colour. That implies a connection with the Lancastrian rose, so here is another theory, but also with a connection to the golden rose. Henry III’s younger son, Edmund “Crouchback” (or “Crossback” – from bearing the cross on his back while on crusade), was created Earl of Lancaster and Leicester. He changed his father’s golden rose to a red one, creating the Lancastrian Rose. In 1283 Edmund brought Somborne Hundred in Hampshire into the Earldom of Lancaster, establishing a connection between Lancaster and Hampshire. In 1351 his grandson, Henry de Grosmont, was created Duke of Lancaster – being the first ducal title created in England. Grosmont’s son-in-law

was John of Gaunt, 4th son of Edward III, succeeded as Duke of Lancaster in 1362; inheriting  all titles and properties of his late father-in-law, including the Lancastrian Rose as his badge. Following Gaunt’s death in 1399, his son Henry of Bolingbroke usurped the throne, converting the Duchy of Lancaster into an appendage of the Crown as the personal fief of the reigning monarch. His son and successor, Henry V, was said to have played a vital part in the most notable theory of the Hampshire Rose’s origin.

One account holds that the red rose was granted by King Henry V to Hampshire soldiers or archers for their valour at the Battle of Agincourt, but there is no record confirming this. It sounds good, especially as the most common depiction of the Hampshire Rose resembles the Lancastrian version. However, there would not have been a “Hampshire contingent”, for English medieval warfare depended on enlisting private armies and was based on the feudal system, whereby most estates were granted on the basis of military tenure (there were other types of tenure as well). The grantee had to provide military assistance, anything from a single armed warrior, to a knight or a complete battalion or small army, depending upon the extent of his holdings. The King held a number of manors in Hampshire from which he could draw numerous retainers, while several others with estates in this county could also provide men-at-arms, archers, knights or battalions. However, none could be considered Hampshire “soldiers” – they were their own lords’ men, brought together as an English army when fighting a common enemy. This was the system until a standing army was formed in the 1660s.

If there is any truth in this account, then Henry V is likely to have granted it to his own retainers who had served him well in the battle. Yet, as royal vassals of the House of Lancaster, they would have already been wearing the red rose emblem. So, this theory does not really solve the mystery.

The seal of the Custos Rotulorum (Keeper of the county’s records) for Hampshire since the reign of Charles I (1625-49) contains a rose. The mace for the Borough of Petersfield was emblazoned with a crowned rose in 1686. In 1842 a device comprising the rose surmounted by a crown, with a cap surrounded by a wreath of laurel leaves appeared on official documents. In 1889 Hampshire County Council (HCC) was established, and in 1895 it adopted the former county badge as it’s official emblem. In 1992 HCC was granted a coat-of-arms by the College of Arms displaying the red rose on its shield. Various Hampshire businesses and organisations then asked if they could use the official rose as their logo, but such requests were declined on the basis of breach of copyright. They were, however, permitted to use their own rose designs. Hence, we can now see several variations of the same theme at work all over Hampshire, from the single red rose to the double red rose, and even the Tudor Rose, representing our county’s emblem.

The mystery of our rose’s origin continues, and will probably never be resolved.

Rescanning of the original BDO index cards started in May of this year with the first phase of transcription starting later that month. This first phase, a verbatim transcription of the scanned card content on to XL spreadsheets, is progressing satisfactorily with approximately 4,500 cards transcribed by mid-July. The transcription team involved in this work […]

Read an article published in the Hampshire Chronicle on 3rd March 2022 about the HGS collaboration with HRO “Family History has never been so easy.” A walk-in enquiry and support service in Winchester and other important new developments offer family historians a first-class service, writes Barry Shurlock  Read the full page article as published HERE.

Members can now watch our recording of FindMyPast’s presentation “Introducing the 1921 census of England & Wales” with Paul Nixon (FMP’s Content Licensing Manager). You’ll find it in the Members’ Area under Members’ Only Data    Then choose ‘Group Zoom Presentations’. If you watched it live (on 1st February), you may wish to see it […]