Home Genealogy Articles A Hampshire History of Immigration and Emigration 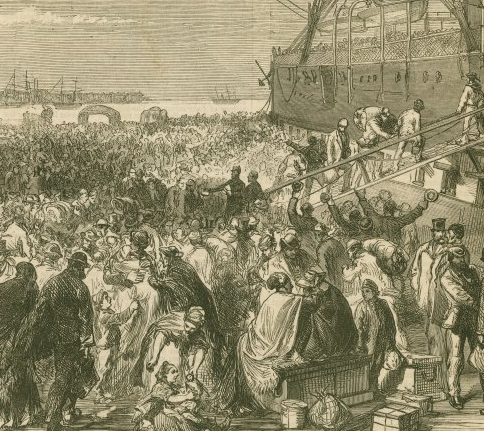 A Hampshire History of Immigration and Emigration

Many people around the world will have a connection with the ancient county of Hampshire because of its long history of immigration and emigration. Particularly so for people whose journey took them across the Atlantic to Canada and America.

From the C16th to the C21st century Portsmouth and Southampton have said farewell to friends and family and welcomed others into the country as they set forth on new adventures and lives overseas.

America was Britain’s first penal colony, with many thousands of people, including women and children, sentenced to transportation in the C17th and C18th.

Many stayed in America after their sentence ended either by choice or lack of funds. Some became involved in the American War of Independence in 1776, which saw the end of America being used as a penal colony. But emigration to both America and Canada continued throughout the C18th and C19th.

Liverpool was the major port for emigration and immigration

An incredible nine million emigrants left these shores between 1830 and 1930 bound for Australia, America and Canada. Migrants from other parts of north west Europe also used Liverpool as their port of emigration, landing on the eastern ports of Britain and journeying across the country to Liverpool. What a mass of humanity…?

The main motives for emigration were:

Decline of Liverpool as the Major Emigration Port

As European emigration switched south to countries such as Italy, Liverpools reign as the major emigration port declined. European migrants chose to leave from closer shores. Liverpool further declined when the Cunard Line switched their operations from Liverpool to Southampton.

By 1879 most emigrants travelled by steamship (another great link to Hampshire; the engineer Isambard Kingdom Brunel came from Portsmouth), drastically cutting the journey time from about 35 days in 1860 to 10 days in 1870.

Did your family leave for America or Canada onboard a Cunard Line ship?

All Cunard archives are held at the Liverpool University Archive.

The HGS can also help you to track down family members either from Hampshire or maybe just passing through.

If you have a family history connection with Hampshire, consider joining the HGS. We can help you to get the most out of your Hampshire heritage.