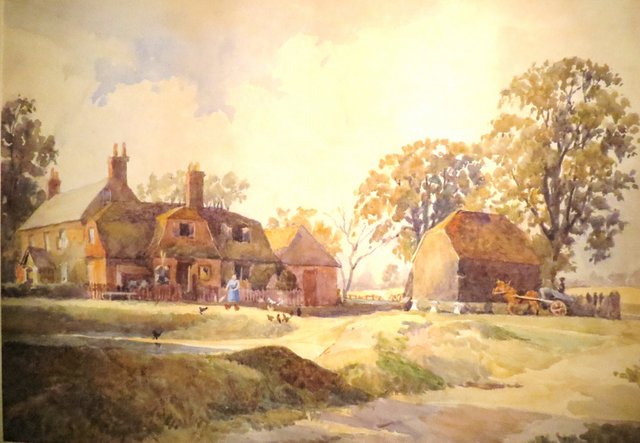 Can you help to unravel this Hampshire picture mystery posed by an HGS member?

The picture is of Middle Park Farm by local Havant artist, William Grant and was one of five or possibly six painted for my family between 1910 and WWI. The whereabouts of three are known, can anyone help with the others?

The farm buildings were situated on the north side of the present Middle Park Way on the Warren Estate, which is on the northern outskirts of Havant.  The farm was demolished in the early 1960s to make way for the housing development.  My great grandfather Frank Budden was the tenant farmer of Middle Park Farm from 1907 until he retired to Emsworth in 1919.

I think that the artist originally painted a picture of Middle Park Farm for each of the five sons of Frank & Ellen Budden and possibly another for a sister.

The family history is as follows:

As well as my picture, which came from my grandfather, there is another in the possession of a grandson of Wilfred Budden and also one on display at the Havant Museum.  Wilmer, Bertie (aka Jack) and Stanley all died without issue, so the version in the Havant Museum had presumably belonged to one of them.   I have no knowledge of the whereabouts of any others, so it would be interesting to hear if anybody has one or has seen one on display elsewhere.