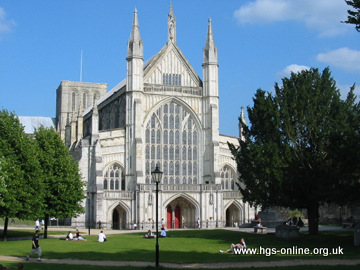 A Short Tour of Historic Winchester

A Short Tour of Historic Winchester

Winchester has such a long and varied history, it would be difficult to mention it all in one short article. I would like to lead you on a walk round this ancient city, that during its history has been the capital of Wessex, the capital of England, and the seat of Parliament.

We begin at the City Mill, one of my favourite places. Built in 1744 on the site of a medieval mill, its fabulous architecture strikes the senses; you could stand for ages absorbing the sense of time this building conveys.

Alongside the mill, the River Itchen flows peacefully by – the Romans, in recognition of its potential as a natural defence, built a wall here. As we stroll on, we can only imagine the appearance of the impressive East Gate that once stood along from the mill.

Walking towards the city centre you will see the commemorative statue of Alfred, King of Wessex, who used the city as his capital.

Further up the High Street we come to the City Cross. Built in the 15th century, and restored in 1865, the majestically masoned cross stands before a fine timbered house. Adjacent to the Cross is the Pentice  –  a row of shops sheltered by overhanging storeys. William the Conqueror`s Palace once stood here; he used the city as a capital, shared jointly with London. Looking back at the Pentice we see the Street Art. Its depiction of the trade emblems, like an old Boot hanging above a shop, or the municipal heraldry, is testament to Winchesters’ fine history.

The stunning West Gate is at the far end of the High Street. Whilst there has been a gate here since Roman times, the present gate is only around 600 years old!

After a  short walk, we arrive at The Great Hall. Built between 1222 and 1236 for Henry III, an 18ft diameter round table hangs high on the inside of the west wall. Some say this was King Arthur’s legendary round table; it was repainted in 1522 for the meeting and visit to Winchester of Emperor Charles V and Henry VIII.

Proceeding down Southgate and turning left into St Swithun Street, you come to King’s Gate, one of the surviving medieval gateways. It is believed to have been added around 1148 for the convenience of the Bishops, citizens and monks of St Swithun’s Priory.

Nearby is College Street; No 8 is the house where Jane Austen died in 1817, at the age of 42. She moved here from Chawton following ill health, to be closer to her doctor.

Winchester College is a short distance away. It was founded in 1382 by William of Wykeham to train scholars for the Church. The college is still a seat of learning, and students are often seen hurrying from one building to another.

By 1900 the cathedral was sinking under its own weight, as the Norman foundations consisted of logs which were laid on bogland. The structure had to be underpinned with concrete. In preparation William Walker, an underwater diver, worked under the foundations for five years to remove peat and decayed timber.

There are a whole host of interesting sights that I have not mentioned. If you get a chance, visit this beautiful city and you will be able to discover for yourself the pleasures that it has to offer.

both obtained from the Tourist Information Centre.

Town Tours in Britian by the Readers Digest.