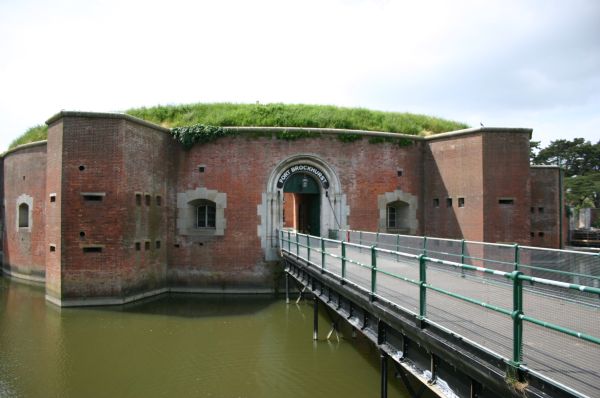 Several generations of Portsmouth people have given the nickname ‘Palmerston’s Folly’ to the Victorian forts on Portsdown Hill.

The forts are on the crest of the hill, overlooking Portsmouth and it’s harbour. They face inland, which to some people looks the wrong way. Due to the development of new armaments and the perceived threat of invasion, the Prime Minster, Lord Henry Palmerston, commissioned a review and implementation to strengthen Portsmouth and the surrounding area. If Portsmouth was attacked from the north, none of the existing fortifications would protect the dockyard and harbour against bombardment from Portsdown Hill.

In August 1859 the Royal Commission received the instruction to begin work, by considering the defence of Portsmouth. The report was submitted in 1860 and the recommendations were:

2) Protection of the anchorage at Spithead

3) Defence of the Needles passage, Isle of Wight

4) Protection of the harbour mouth

At Hilsea Lines the moat was widened and walls strengthened. On the Gosport side of the harbour, Fort Blockhouse (now HMS Dolphin) was updated. Besides five new batteries constructed along the sea front, there were six new forts built – Gomer, Grange, Rowner, Brockhurst, Elson and Fareham.

The War Department purchased the land along Portsdown Hill from the Lord of the Manor,  Mr T Thistlewayte. Approximately 900 acres were taken over and clearance rights obtained for another 1000 acres. Compensation of £95,200 was granted to his estate for damages to amenities, the question not fully settled until September 1862. Compensation for residents evicted from their homes is unknown. Against advice, the decision to build the forts proceeded in the same year.

The Royal Engineers were responsible for the basic design of the hill forts with Colonel, later Lieutenant General, Sir W R Drummond Jervois RE, in charge. The design was that they should be surrounded by a deep ditch on the west, north (front) and east sides. Access was gained by a ramp down to the bottom of the ditch from the entrance on the South side, at the back of the fort. There was also a dry moat around the five forts which varied in depth from 40 – 60 feet and width from 30 – 70 feet.

The escarp is about 10 – 15 feet thick, backed by earthwork and surmounted by a rampart. The platforms on the inner side of the rampart were for additional guns firing over the parapet. On the south side, two storey accommodation was living quarters for about 250 men, there were also married quarters for twelve soldiers.

Either side of the barrack block were single storey rooms and a stable. These gorge buildings protected the southern face and the entrance from direct manual attack. The walls had loopholes for rifle fire. Underground tunnels went from the Barrack block to the caponiers in the moat. The Barrack block walls were 4 – 5 feet thick with a thick reinforced concrete roof.

Fort Wallington, completed in 1865, was built on blue slipper clay. This caused the escarp walls on the north, north west and west sides of the ditch to slide forward and the parapet to subside. Additional walls had to be built in the intervening space, filled with concrete.

Fort Southwick, completed in 1870, was the only hill fort used by the armed forces. Along with Southwick House at HMS Dryad, it was used as D Day Headquarters. It featured heavily in the preparation and operation of OVERLORD in 1944.

Fort Purbrook, completed in 1870, was occupied by the Army until 1925. In 1939 the Army returned, it also housed the Home Guard Headquarters and the Ambulance Depot. The Navy used it for radar in 1947, and a Navigational School until 1968.

Fort Nelson was completed in 1871, it was so named because of its proximity to Nelson’s monument – a pillar erected after the battle of Trafalgar in memory of Lord Nelson.

Fort Widley was completed in 1871. During World War 2 it housed the Royal Engineers and a bomb disposal headquarters. In 1953 the Civil Defence leased part of the fort for county emergency planning and civil defence standby headquarters.

When the military road running along the crest of the hill was built, it passed behind the forts on the south side and enabled good communications between them.

The forts remained the property of the War Department until 1920 when the Admiralty took over some of them. All Portsdown Forts played a role during the Second World War. Hasty alterations were carried out to accommodate thousands of troops along Portsdown Hill prior to the massive invasion fleet just before D Day.

This stained glass window, known as the ‘D Day Window’, is in Christ Church, Widley – the Garrison Church for the Portsdown Forts when the Army were in occupation.

Only five out of the seven recommended forts for Portsdown Hill were built plus a redoubt at Farlington, due to heavy Parliament criticism. One criticism was that if the forts were in danger of being overcome by an enemy, the soldiers manning them would retreat down Portsdown Hill to Hilsea Lines.

Rescanning of the original BDO index cards started in May of this year with the first phase of transcription starting later that month. This first phase, a verbatim transcription of the scanned card content on to XL spreadsheets, is progressing satisfactorily with approximately 4,500 cards transcribed by mid-July. The transcription team involved in this work […]

Read an article published in the Hampshire Chronicle on 3rd March 2022 about the HGS collaboration with HRO “Family History has never been so easy.” A walk-in enquiry and support service in Winchester and other important new developments offer family historians a first-class service, writes Barry Shurlock  Read the full page article as published HERE.